Deprecated: Function create_function() is deprecated in /var/www/wp-content/themes/twentysixteen/functions.php on line 1
 One Thing | Amy Stinnett
Skip to content 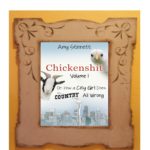 We ambled along the edge of the field, not going much faster than I could walk on pavement. When I asked Jodie what this was called, meaning how the horses were walking. She laughed and said, “Walking.” Then she told me about horse gaits, beating them out on the front of her saddle. Clop-clop, clop-clop. She pointed to different places around us and told me things, names of mountains, visible to us here and a little farther away, people my dad knew, and all sorts of other things.
In between we were quiet, listening to the hooves making contact with the pasture and the horses’ breathing as we went along. When we came up to a group of bushes, about 300 tiny birds began screeching and burst out and above us to the left. We stopped and focused, almost hypnotized, by the reflection of the sun on their wings, as they turned many times in mid-flight.
– Chickenshit: Crisis #7 The One Thing
Billie and Jodie spend a beautiful afternoon taking care of Sheila’s horses. Billie grows conflicted over selling the farm, even as more people show interest in buying it. The movies make it seem so easy to figure things out. Real life decisions are a little tougher for one Billie Hatcher.

The One Thing … Wouldn’t it be nice if life were that simple. If we could just search for that one thing, like the character, Curly (Jack Palance), talks to Mitch (Billy Crystal) about in City Slickers, that one thing that gives meaning and definition to our lives, grab it and hang on for dear life. Of course, we all can, but there are always consequences, and usually our one thing is made up of complicated parts, often at war with each other. Even when we keep the one thing in mind, life forces all sorts of compromises along the way.
With Billie’s dad, Dan, the farm became the one thing he could not live without. Unfortunately, his relationships with his family suffered because his one thing did not mesh with their lives at the time.  His one thing did bring other benefits, though, like the many friendships in the community and building a strong, loyal friendship with Elliot.
In my own life, I’ve searched for the one thing (and, yes, I cannot get the INXS song out of my head when I write about this) over decades that are now mounting into middle age, and had various answers at various times. In my teens and early twenties, it was all about finding love. I went to unbelievable lengths at times to win and keep the affection of another. In my thirties, it was about raising a child. I don’t regret one single opportunity I missed out on because of my focus on parenting. It has been (and still is) the most rewarding experience of my life. And now, in my forties, with my prior priorities still in my life, I have been struggling to focus on one of the one things I wanted to do all along (forgive the grammar) – gasp for air – write.
I just read an interview with Terri Gross, and she said that she never wants to retire, has no plans to ever do so. She’s okay that her career didn’t allow for children because she never had a burning desire to procreate. I guess, when you have that kind of certainty about something, it is your one thing, and it can take you through your whole life. Only being four years into taking this writing thing seriously, I cannot imagine ever quitting this process that both drives me and drives me crazy. Whether that will be the case a few years from now, or whether I will find a new one thing, remains to be seen.  I just know that I am enjoying the hell out of it for now, and, damn the consequences, I’m holding on for dear life. And I hope I make a few friends along the way.