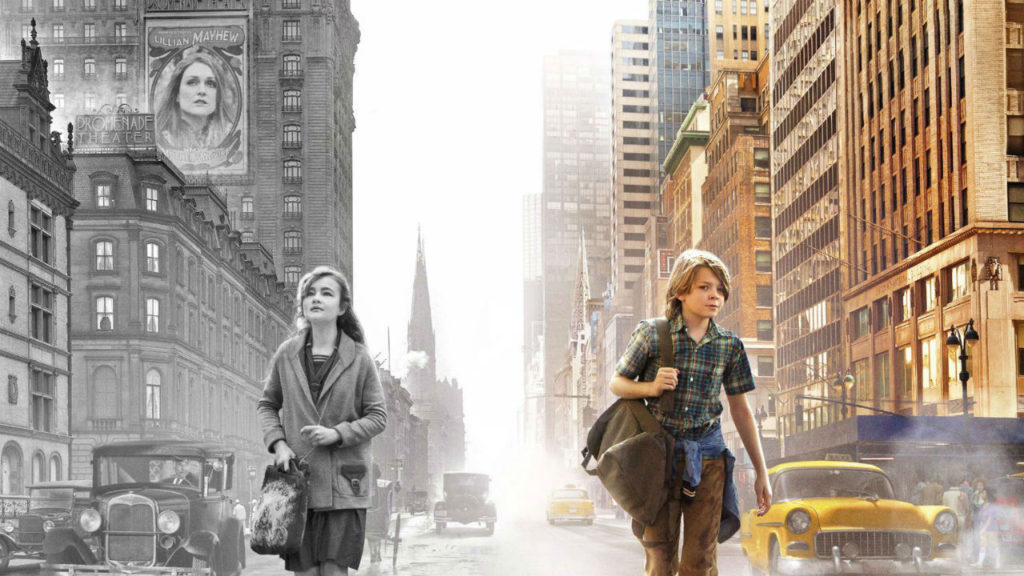 If you’re not looking for the movie, Wonderstruck, screenplay and novel written by Brian Selznick and not to be confused with the newly released, Wonder, you might miss it. I had never heard of it, and of the dozen or more trailers I have watched over and over again for the last few months, Wonderstruck was not among them. Although the children are played by less lesser known actors, Millicent Simmonds (new actress) and Oakes Fegley (Pete’s Dragon), it is strange that Julianne Moore’s involvement (she plays two important characters in the film) did not lead to more promotion. One day I just happened to check the dollar theater for movies I might have missed, and there it sat, teetering on the edge of disappearing forever. I clicked on a couple of trailers and thought it was worth watching. Even though it has gotten me into trouble in the past, I am still likely to watch any movie set in a museum, a college, or a library. I chose Wonderstruck over a couple of newer movies, and I am so glad I did. If you are a setting freak like me, stop reading and go watch the movie right now before it disappears from the big screen. If not, here’s what you will miss.

From the trailer, it is clear the two main story lines will merge into one, but as I watched I kept trying to do the math. The lady is old enough to be his grandmother, the mother just died, who is Dad again? Maybe it dragged a little in the beginning of Act II, or maybe a small pizza coma kicked in, but the movie quickly drew me back in and I stayed with it until the end. Unlike many movies I have seen of late, the plot is sound, without any holes or miss-steps. All the important questions are answered by the closing credits. The movie may be a miss for modern tweens who are without a long attention span, but it did connect with my inner twelve-year-old.

The first story line we see is set in 1927, where the main character, a deaf tween girl, rebels against her father, who wants her to study lip reading, ostensibly so she can fit into society better. Her reaction? Flee the house and head off to downtown New York to see her beloved actress, Lillian Mayhew, a woman she scrapbooks and dotes on. When her venture does not work out, she flees once again and heads straight for the Museum of Natural History. All along the route, the scenery, at least to this viewer, seemed flawless.

Interspersed with the first story line, is one about a twelve-year-old boy named Ben who becomes deaf from an accident. He, too, escapes a confusing life to run around New York, but this time in 1977. As he gets bumped around from one street to the next, eventually landing at the museum, as well, I scanned every corner of the screen for memorabilia and setting. From the storage cabinet fasteners to shoes to vehicles, and just the general feel of the film, every inch of the screen felt like the seventies. Although Space Oddity by David Bowie was used throughout the movie, the soundtrack includes other songs and orchestral music that adeptly set the mood. I was immersed in a place which felt like a lot like my childhood, those years in the late seventies that were striving to be the early eighties.

The museum scenes were cool, too. In the girl’s narrative, we get to see dioramas and displays from the twenties, as well as one of the exhibits that serves as a connection between both stories. In the boy’s narrative, we get to experience the museum displays, including another one that ties in with the story, and we get to go to an off-limits room, where the boys hang out and bond with each other.

I have not read the book yet, but I can see the movie strives to include many key points of the plot that would have been skimmed over in a different production. This story is beautiful, with a couple of tear-jerking moments and one of those tingly, realization moments, if you pay attention. The movie is thoughtful and adorable, definitely worth watching.

Next, I want to get a Redbox copy and go frame by frame to look for the digital watch I used to wear, scrutinize the furniture and glassware in Ben’s house again, and see if I can find my dad’s old car, a boat-sized 1972 Gran Torino, in any of the street scenes. In my old age, those things are comforting, don’t ask me why. If you see it, sit up close, and please let me know what you think of it.