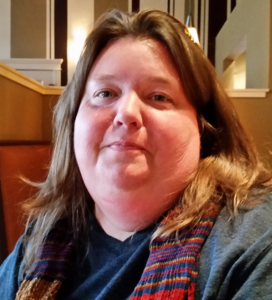 Amy Stinnett grew up in Louisville, Tennessee. By a circuitous route, she completed her degree, made two cross country moves, and raised a child.

She has written short stories and articles that focus on LGBTQ relationships and coming of age, edited an LGBTQ newspaper, and edited works for other writers. She has a varied background, having worked in group homes with developmentally delayed and chemically addicted individuals, a homeless shelter, private prisons, and a day care, to name a few places.

She has a degree in English from the University of Tennessee, Knoxville and is a member of the Idaho Writers Guild and the W.I.L.D. Writers Group.

Amy has also lived in Georgia, Florida, Arizona, Idaho, and Eugene, Oregon. She now lives in Ontario, Oregon with her partner, Stephanie, and their son, along with their two dogs, cat, nine goats, and too many chickens to count.