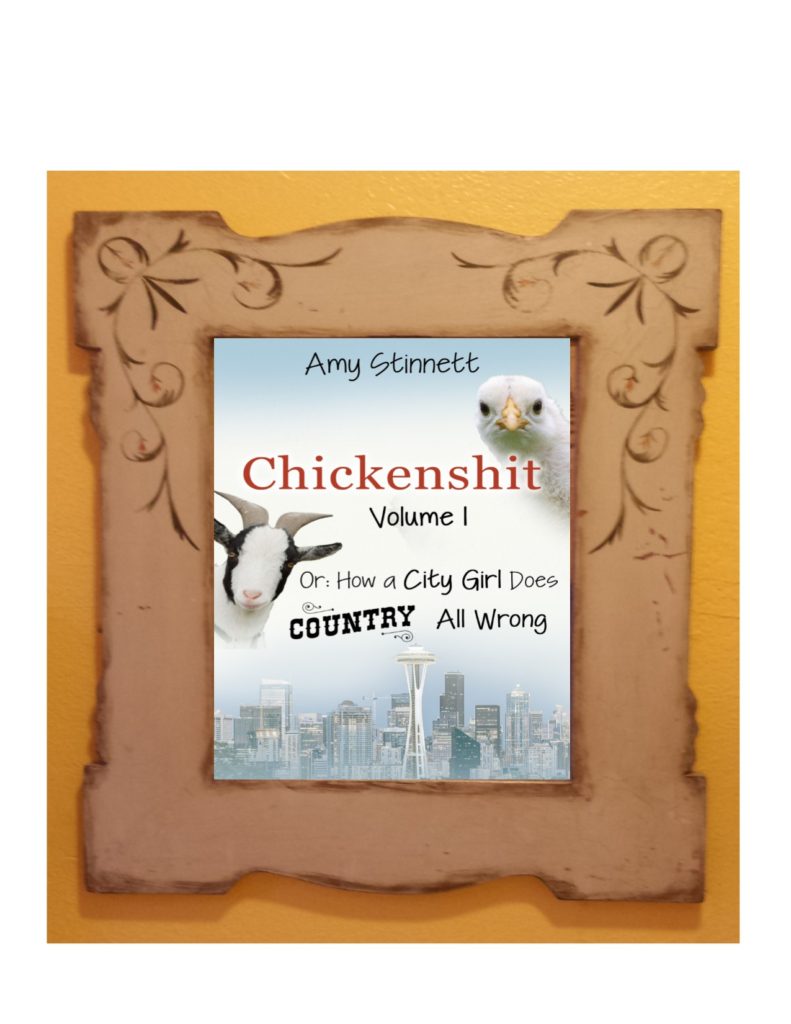 One of them said Dad always told a story about how when anyone called me Billie the Kid, I would turn beet red and steam would shoot out of my ears. “And if looks could kill, we’d ‘a all been a goner,” he quoted. So Dad nicknamed me Outlaw on the spot, which seemed to appease me. I could hear Dad on our last phone call at Thanksgiving. “Hey, there, Outlaw,” he said, sounding every bit like Sam Elliot, “what’re ya up to on this fine morning?”

In Crisis #1, we meet Billie, her Mom and Dad, Bill (Dad’s lawyer friend), Elliot (the hired hand), and a little grey chicken. Billie’s Dad is terminally ill and in respite care, and Billie gets there in time to spend a little time with her estranged father before he dies. She is completely blindsided by Bill’s announcement.

Chickenshit:Or How a City Girl Does Country All Wrong is Volume I of a series. Available  now on Kindle, Amazon paperback November 2017. The next volume will be published in Spring/Summer of 2018.

It has been a relatively short road to completing Chickenshit. The idea was hatched (get it?) early this summer, and I took what turned out to be excellent advice (thanks Chris) to do an accountability blog. It couldn’t have been easier to stay on track. Still, a couple of times, I had technical difficulties and too many irons in the fire. Yet, I persisted, and a mere five months since conception, er, I mean inception, the piece has made it through several drafts and into e-publishing. And soon, it will be available on paperback. Five months, people. Who knew such a thing was possible?

Anyway, I will continue to blog on Wednesdays. The next nine weekly posts will offer a quote from each chapter and reveal some plot (but no spoilers), followed by some of my bullshit about something, probably my next project. I promise not to whine about formatting unless someone opens the door for that. Chickenshit Volume II is on the back burner until early next year. I am currently writing the second novel featuring Alex and Kat. I really should come up with a name for the series. Any ideas? 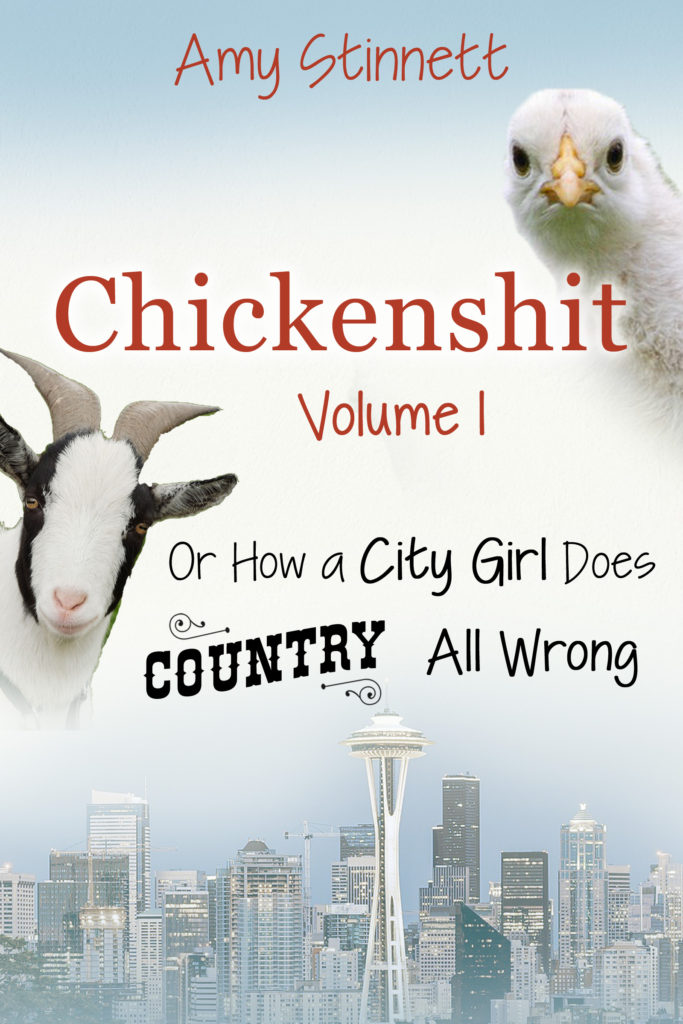 The first collection of my series, Chickenshit, is now available for pre-sale on Amazon Kindle for $2.99. Its official release date is 11/22/17, just in time for Thanksgiving. You can still read the entire series for free on amystinnett.com, but only for the next five days.

For those people (I’m one of those people) who like to read old-fashioned books made of paper, the paperback version will be out in time for Christmas shopping (you can check back at the same link above).

Read below to get a gist of the plot, but you’ll have to read the series to find out what torture (and bliss) Billie has in store for her.

Billie’s life is right on track. Solid. She has a cute girlfriend to hang with and an internship to build her resume until she goes back to U Dub next fall. But when her girlfriend bails on her and she inherits her dad’s farm in nowhere Idaho, you could knock her over with a feather. Milepost is a world away from Seattle in more ways than one. There’s no good coffee, the locals are a mixed bag, and there is no social life whatsoever. As for the farm – the chickens try her patience, everything she owns is covered in poop, and the goats may prove her undoing. There’s no doubt she is in over head just getting the place ready to sell, and her mom and best friend are frustratingly supportive without giving her any answers. Luckily, she has help from a hired man of sorts, an attorney she happens to be named after, a gorgeous librarian/cowgirl, and a bunch of people she doesn’t even know. The road to making a decision is definitely rocky, and soon she begins to ask herself: How can she go back to the big city after being down on the farm? 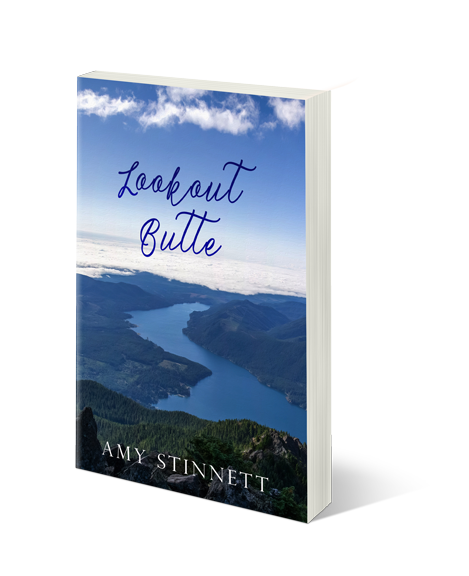 Salutations! That’s my fancy way of saying, “Thank Goddess September is over!”

I hope everyone had a great Halloween. It is so good, though, to be out of October and into November. We have been working a few season end projects around the farm, and I am sore and tired. Unlike Kat, I am old, overweight, and tire easily.

I regret that I was unable to finish this week’s edition because work on the farm, like the next edition, has been labor intensive (that’s a pun for those paying attention). So, in my post today, I will present another excerpt from my novel, Lookout Butte, and resume with Chickenshit:Crisis #9 Just Kidding next week.

Hopefully, after a quick jaunt to Eugene in a few days to pick up organic chicken feed, I can settle into writing for National Novel Writing Month. It’s a huge goal to get 50,000 words written in one month as a first draft of a novel. I have never written that much in one month, but I have the highest hopes and know it will be an excellent start to my second novel in the Alex and Kat series.

Chris Hollaway from the Small Business Center in Ontario has organized a local NaNoWriMo group Western Treasure Valley NaNoWriMo. There are 20 events scheduled for participating writers to join over the course of the month. Thanks, Chris, for organizing this!

My NaNoWriMo name is AmyStinnett, unless I change it, if anyone would like to add me as a friend. I have yet to name the book series, but I do have a working title for the next book, Whippoorwill Springs.

Since the last excerpt showed Alex, the main character, in one of her weakest moments, I thought I would post one that reveals she has multiple layers. Also, this excerpt has one version of the dream that was referenced in the dream interpretation with local Indie author, Merri Halma. Without further ado …

If anyone ever asked Alex where her favorite place was, she would tell them about an exhibit at the Museum of Modern Art and the summer she lived in New York City after her freshman year. A friend of her dad’s had a daughter who was out of town all summer. She was studying abroad in Madrid and needed a house sitter for her tiny apartment. Alex had scraped together the cost of a membership to MoMA from her first paycheck at her new part time job at a coffee house. The museum became a fixation for her. She would go there every day she could, sketch in her notebook, and admire the paintings. Her parents came down and took her out for dinner and a show a few times, but MoMA held the lasting impression from that summer.

But the truth was, her favorite place was much less artsy and much closer at hand. After exploring parks around Atlanta over her first two years there, she found a hiking trail near Abbott’s Bridge in the Chattahoochee River National Wildlife Area. With time on her hands, Alex headed there now. She left her car in the recreation area parking lot and followed a paved trail a short distance before it ended in a densely wooded spot. Instead of turning back, though, she picked out a small trail used by animals and followed it until the trail was no longer visible. In just a few minutes, she found herself in a small meadow that was as private as a penthouse suite. The river was within earshot, and, in the many times she had been there, the most human contact she had experienced was a flash of color when someone had skirted the edge of the meadow and headed down the river bank to fish. Other than the odd deer or dragonfly, this space was hers and hers alone. The sky was usually bright blue, but even on colder, gustier days, this room-that-was-a-view was well-protected by thick woods on all sides. When a chance downpour hit, she would find shelter under the trees and revel in the splash of water on leaf and puddle.

Today, Alex spread out a blanket in a semi-shady spot near the west side of the field and took a copy of To Kill a Mockingbird out of her bag. The sun felt great, but she had to be careful and lie mostly in the shade. She learned her first year in Atlanta, with painful consequences, that her skin required lots of sunscreen and long sleeves and pants to keep from burning. Still, the sun’s warmth lulled her into a blissful state, and she never opened the book.

Alex’s thoughts flitted from her new job to Kat, to her parents and random memories. At about 6:30, she jolted awake, slightly chilled because the sun, though far from setting, was now obscured by trees. Her mind was still fuzzy as she sensed a warm glow floating in the air nearby, as a dream, one she had experienced many times, swelled and broke like a wave over her conscious mind.

She is still a child and lying under the Christmas tree, looking up through the branches at the ceiling, to her parents who are sitting on the couch, then to her brother in the chair next to them. “I’m not a child,” he repeats, periodically. She feels strange, like she has overheard something she shouldn’t have because she is hidden, so she slides out from under the tree. As she starts to stand up, she feels herself growing taller. First, a little taller than her mom. Then, she takes a breath to say something to get her family’s attention, but they are looking at the Christmas presents and don’t see her. When she lets out the breath, she grows taller than the Christmas tree. She takes another breath and looks down at her family. “Hey, Goober,” says Shawn, “open my present.” He is looking up at her but doesn’t react to her size change at all. She exhales again, and she grows so large that when she stands up fully, she bursts through the roof, where a torrent of sleet and snow blasts past her and down into the house. She stretches her arms out to keep the weather from hitting her family. Even though the tempest whirls around them, her family is still opening presents, unaware of everything. She sees smoke coming from the neighbor’s chimney, and she wakes up with the feeling that no one except her knows anything strange is happening.

Alex sat in her meadow, dazed for a moment, watching a lightning bug crawl across her leg. It reached a corner of fabric on her knee, spread its wings, and flew away. Alex saw the faint glow of its light, as it reached the high grass near the woods and disappeared. She felt a strange and unnamable tug inside, gathered up the blanket, and headed back to her car. She checked her phone to find a text from Kat. Crap! She had mixed up Kat’s days off! She loaded the blanket into the trunk, sent Kat a quick response, and headed for home.